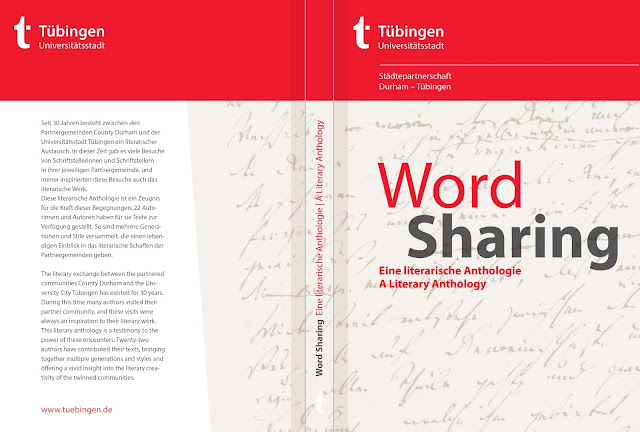 THERE WILL BE A SPECIAL UNESCO WORLD BOOK DAY EVENT IN THE LAKESIDE ROOM, VAN MILDERT COLLEGE, DURHAM UNIVERSITY ON MONDAY 23RD APRIL AT 7PM TO PROMOTE 'WORD SHARING', THE LITERARY ANTHOLOGY CELEBRATING THE 30TH ANNIVERSARY OF THE LITERARY TWINNING BETWEEN DURHAM AND TUEBINGEN. THE ANTHOLOGY HAS BEEN EDITED IN TUEBINGEN BY CAROLYN MURPHEY MELCHERS AND MICHAEL RAFFEL AND IN DURHAM BY DOCTOR KEITH ARMSTRONG.
POETS FROM DURHAM AND THE NORTH EAST WILL READ FROM THEIR POEMS IN THE ANTHOLOGY. IF YOU WOULD LIKE TO COME ALONG AND READ FROM YOUR OWN CONTRIBUTION TO THE BOOK, PLEASE FEEL FREE. FAMILY OR FRIENDS MIGHT ALSO LIKE TO RENDER SOMETHING BY THE LATE JULIA DARLING, MICHAEL STANDEN AND ALAN C. BROWN.

KEITH ARMSTRONG WILL PERFORM THE INTRODUCTIONS ON THE NIGHT AND LEAD THE READINGS, ALONG WITH FELLOW CONTRIBUTORS KATRINA PORTEOUS, GARY MILLER AND PAUL SUMMERS.

POET ROB WALTON ALSO CONTRIBUTES SOME OF HIS POETRY FOR WORLD BOOK DAY.

SPECIAL GUESTS WILL BE ANDREA MITTAG AND MATTHIAS KAISER FROM TUEBINGEN WHO WILL READ FROM THEIR OWN WORK.
THEY ALSO APPEAR AT SEMINARS IN THE ENGLISH AND GERMAN DEPARTMENTS OF DURHAM UNIVERSITY DURING THEIR STAY - AND WILL CELEBRATE SHAKESPEARE'S BIRTHDAY WITH A DRINK IN THE SHAKESPEARE PUB!
THANKS TO THE KULTURAMT IN TUEBINGEN FOR SUPPORTING THE ANTHOLOGY AND IN BRINGING OUR GUESTS FROM TUEBINGEN TO DURHAM. THANKS TO DURHAM COUNTY COUNCIL FOR THEIR SUPPORT TO DOCTOR KEITH ARMSTRONG IN ESTABLISHING THE LITERARY LINK IN 1987 AND FOR CONTINUED HELP OVER THE THIRTY YEARS.

People meet, get to know one another, exchange views – and each time something is left behind: a memory, a thought, a connection, an idea which can go on to have a significant impact even many years later.
Twinning, or city partnering, harnesses the very power of meetings to constantly open up new possibilities for citizens to break down barriers. This was why County Durham and the university town of Tübingen first became partner communities in 1969. Many individuals care for and promote this link, which brings together schools, experts, artists, musi-cians as well as politicians. This is what twinning relationships are all about; strong commitment on the part of people and associations who enjoy tak-ing part in exchanges and which leave an unforgettable and long lasting effect on them and their communities.
One individual in particular stands out in this ongoing exchange be-tween Durham and Tübingen; someone who has connected both places on a literary level for not just a few years, but more than three decades – author, poet and literary activist, Dr Keith Armstrong. Thanks to his commitment over the past 30 years, more than 30 authors have found their way to their respective partner regions to seek inspiration for their work.
On the 30th anniversary of Keith Armstrong’s first visit to Tübingen in 1987, this publication seeks to serve as a testament to the strength of the partnership, as well as acknowledging those who have taken part in the project and as a chronicle of all their achievements. Twenty-two authors have contributed their texts, bringing together multiple generations and styles in this anthology which offers a vivid insight into the literary creativ-ity of the twinned communities.

The partnership with County Durham and the City of Tuebingen in South Germany was established in 1969.
Poet Doctor Keith Armstrong, who gained his doctorate at the University on Durham in 2007, following on from Bachelor's and Master's degrees there, first visited Tuebingen in November 1987, with the support of the County Council and the Kulturamt in Tuebingen, to give readings and talks for a period of a month. Since then he has travelled to the city over 30 times and helped arrange for Durham poets, musicians and artists and their counterparts in Tuebingen to visit their respective cultural twins.

A special celebration of the literary/arts links between the cultural partners was held on May 17th 2015 at Tuebingen’s Club Voltaire as part of the Tuebingen Buecherfest.  This was arranged by poet Tibor Schneider, Michael Raffel of the Buecherfest and Doctor Armstrong. Those featured included Gary Miller, singer/songwriter from Durham band ‘The Whisky Priests’, poets Carolyn Murphey Melchers, Sara Hauser, Anna Fedorova, Yannick Lengkeek and Tibor Schneider and rock musician Juergen Sturm with Mary Jane.

Tuebingen poets Anna Fedorova and Yannick Lengkeek came to Durham in November 2015 for readings and discussions and Manuela Schmidt and Florian Neuner followed suit in April 2017.

Keith Armstrong returned to Tuebingen in September 2016 for readings of his many poems inspired by his visits to Tuebingen over the years, including a literary promenade around the old town and along the Neckar accompanied by accordionist Peter Weiss.
He was also there in November 2017 with fellow poet Paul Summers and Gary Miller to attend the launch of a new anthology, Word Share, published by the Cultural Office in Tuebingen and edited by Carolyn Murphey Melchers and Michael Raffel in Tuebingen and Keith Armstrong in Durham to mark 30 years of the literary twinning between Tuebingen and Durham and featuring a selection of poetry by some 22 writers from Tuebingen and Durham.
The anthlogy will have its Durham launch as part of a World Book Day event on Monday 23rd April at the University of Durham. Special guests at the event will be Andrea Midi and Matthias Kaiser visiting writers from Tuebingen.
Looking back, Keith was in Tuebingen from Tuesday 11th November 2014 to Saturday 15th when he performed his poetry in the legendary Heckenhauer’s Bookshop, one of his favourite bars The Boulanger, at the Carlo-Schmid-Gymnasium (school) and at Weinhaus Beck for a poetry breakfast. He was joined by Tibor Schneider, Sara Hauser, Yannick Lengkeek and Anna Fedorova with Peter Weiss on accordion and Juergen Sturm on rock guitar and vocals.

Sara Hauser visited Durham from Monday 12th to Thursday 15th May 2014 for sessions at the University's English and German Departments  and meetings with local writers, artists and musicians.
So the twinning continues to go from strength to strength. Looking back on things, Armstrong and folk rock musician Gary Miller, lead singer of Durham band the Whisky Priests, travelled to Tuebingen at the end of March 2012 for performances in pubs, cabaret venues and schools where they performed with Tuebingen poet Tibor Schneider who visited Durham in October of that year as part of the ongoing exchange.
Tibor joined his Durham counterparts for readings at Durham University and at the Half Moon Inn. He was also interviewed on BBC Radio Tees concerning his Durham visit.

This trip reciprocated a visit to Durham in November 2010 by Tuebingen poets Henning Ziebritzki and Carolyn Murphey Melchers, when Juergen Stuerm also took part in a series of pub performances. There was a special event at Clayport Library, Durham City on Monday November 1st with the Tuebingen poets and special guests from Durham, followed by a rousing session in the Dun Cow when Juergen, with Mary Jane, and his Durham counterparts, Gary Miller and Marie Little belted out their lively songs.
Armstrong was also in Tuebingen in May 2010 with Gary Miller for performances in his favourite Tuebingen bar ‘The Boulanger’ and at a local school. This followed a special guest appearance in 2009 at the biannual Book Festival, a reading with Tuebingen counterpart Eva Christina Zeller and a visit to local schools. Eva visited Durham for readings in schools and at a special event on May 13th 2009 at Clayport Library which also featured poets Katrina Porteous, Jackie Litherland, Cynthia Fuller, and William Martin, as well as Doctor Armstrong and music from the Durham Scratch Choir and Andy Jackson.

The literary/arts exchange has been supported by Tuebingen’s Kulturamt and Durham County Council.