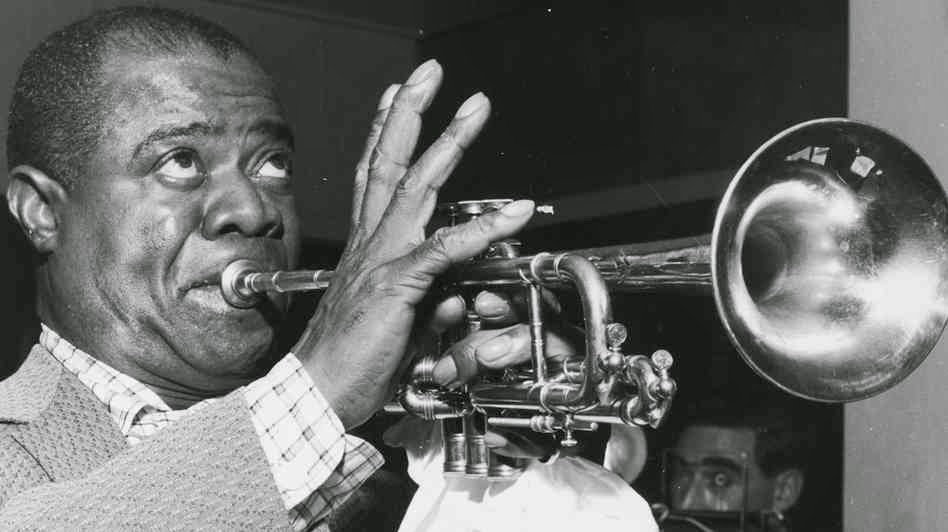 Great Satchmo plays all bathed in sweat,
A salty Niagara pours from his brow,
But when the trumpet rises to the clouds,
It growls and roars.
To the whole world he plays the way he loves,
He is stolen from us by the grave,
he was stolen first before his birth
From his sweet Africa.
In hidden reprise for the chains of his fathers
His music enslaves us all like helpless babes.
The whites of his great eyes flicker in sorrow
As he howls and horns about the globe--
This kid from a children's home
In the town of New Orleans.
Great Satchmo plays all bathed in sweat,
His nostrils smoke like two great muzzles.
Thirty-two white projectors in his mouth,
But the sweat is as natural
As a beautiful mighty hippo
Rising snorting from an African river.
Stamping on fan notes with his heel,
And wiping the downpour from his brow,
he throws handkerchief after handkerchief
Into the piano's open womb.
Again back to the microphone
pressing down on the stage till it cracks,
Each wet handkerchief is as heavy
As the crown of art.
And art is very far from pose,
When it labors it's not ashamed of sweat.
It's not the charm of prattlers
But full of movement of heavy things,
The tragic labor of a trumpet player
Whose music is tatters of lung.
Though art is bartered and sold,
That's not what it's all about.
The poet and the great jazzmen equally
Like brothers cut their gifts to others from soul.
Great Satchmo, will you make it to heaven"?
Who knows!
But if it happens--Play!
let the good times roll once more!
Shake up that boring state of little angels.
But so there'll be no remorse in hell,
So death will cheer us sinners up,
Archangel Gabriel,
Pass your horn to the better player
To Louis!

Posted by The Armstrong-Dixon Line at Friday, April 18, 2014