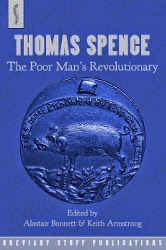 Join the Thomas Spence Trust and Northern Voices Community Projects in marking and celebrating the bicentenary of Thomas Spence (1750-1814). On September 11th 2014, poems, stories and songs will be performed at the site of the Spence plaque on Broad Garth at 14.00 and then readings from his work and that of his friend and sparring partner Thomas Bewick with poems and songs inspired by both of them will be performed at the Red House, Newcastle at 19.30 (over 18s only).

A display of books and documents to mark the bicentenary of Newcastle born Thomas Spence who died in London in 1814.

Breviary Stuff is pleased to announce...
Thomas Spence: The Poor Man's Revolutionary
Edited by Alastair Bonnett & Keith Armstrong
paperback • 156x234mm • ISBN 978-0-9570005-9-9
*To be published in September 2014.
For details and a table of contents: http://www.breviarystuff.org.uk/thomas-spence-the-poor-mans-revolutionary/
2014 marks the 200th anniversary of the death of an important and original voice in the history of radicalism: Thomas Spence. Spence described himself as ‘the poor man’s advocate’ but he may equally be described as ‘the poor man’s revolutionary’, for what he advocated was a dramatic over-turning of the existing social order.
Perhaps Spence can be best summed up one of the inscriptions he placed on one of his self-minted coins, the coin his friends chose to place in his coffin. It depicts a cat. It stares straight out at us, around it the words, ‘IN SOCIETY LIVE FREE LIKE ME’. Spence wasn’t interested in compromise, with reforms and half-freedoms. He was stubborn. Contemporaries described him as ‘querulous’ and ‘single-minded’. One obituary also observed he was ‘despised’, yet ‘not despicable’.
But who was Thomas Spence? And why did he excite such passions? This collection of essays seeks to go some way to find answers to these questions. It offers a series of insights from contemporary experts on different aspects of Spence’s life and times. We are also delighted to be publishing some pamphlets by Spence himself, including Property in Land Every One’s Right, which has not been in print since it first appeared over 230 years ago.
Spence’s story is a rags to rags tale of defiance and ingenuity. Today Spence’s name is little known but this in no way reflects his significance. In the first two decades of the nineteenth century it was synonymous with ultra-radical opinion. Thomas Spence was the subject of four contemporary biographical memoirs. Moreover, three years after his death an Act of Parliament was passed prohibiting ‘All societies or clubs calling themselves Spencean or Spencean Philanthropists’. Spenceanism appears to be unique: it has a good claim to be the only political ideology to have ever been outlawed by the British Parliament.
Spence’s scheme for local and democratic ownership of the land found a receptive audience within sections of the labouring poor. In 1817 Thomas Malthus observed that, ‘an idea has lately prevailed among the lower classes of society that the land is the people’s farm, the rent of which ought to be divided equally among them’. This, in a nutshell, is ‘Spence’s Plan’. It sounds simple but it carried profound economic claims. It was a message spread more by way of tavern meetings, chalked graffiti and ballads than by published treatise.
In 1787 Spence moved to London, setting up a bookshop on Chancery Lane. He plunged himself into the capital’s turbulent radical sub-culture. He sold Thomas Paine’s The Rights of Man and went to prison for doing so. But he disagreed with Paine on a number of fundamental issues. Paine had no qualms about private property in land. Spence began issuing a penny weekly, Pigs’ Meat or, Lessons for the Swinish Multitude, which could hardly have been more inflammatory. Spence was taking considerable risks in a dangerous city: spies, threats and conspiracy swirled around him.
Spence’s wish for ‘perfect freedom’ often took him one step further than his peers. He accorded women equal democratic rights. For the time it was a daring idea but Spence went even further. For what about the rights of children? Spence’s The Rights of Infants no doubt provoked more than a few incredulous smiles when it was published in 1796. Yet cruelty towards children was a topic Spence returned to time and again and it is fitting that today he is cited as one of the world’s first champions of children’s rights.
He was an angry man, a revolutionary and an insurrectionist but he was anchored by humanitarian concerns and a wide-ranging, omnivorous, interest in the betterment of his fellows. In this book we hope to go some way in retrieving Spence, of bringing him before a new generation.

Posted by The Armstrong-Dixon Line at Friday, August 22, 2014